Of course I don’t pretend to have the answer to this question but let me offer the reader a point of view that it might not be that far in the future!

When will Coaching reach mass market success or acceptance?

In his TED Talk, Simon Sinek used the theory of diffusion of innovation to explain how mass market success or acceptance can be reached.

Diffusion of innovations is a theory that seeks to explain how, why, and at what rate new ideas and technology spread through cultures. Everett Rogers, a professor of communication studies, popularized the theory in his book Diffusion of Innovations; the book was first published in 1962, and is now in its fifth edition (2003).

In his Ted Talk, Simon Sinek explains that if you want to have mass market success or acceptance of an idea you cannot have it until you achieve this tipping point between 15 and 18% and then the system tips.  You have to cross this gap between the line that includes the first 2 categories and this tipping point (the chasm).  The early majority will not try something until someone else has done it.  The first two categories are more proned to act on their gut decision and to act on what they believe. 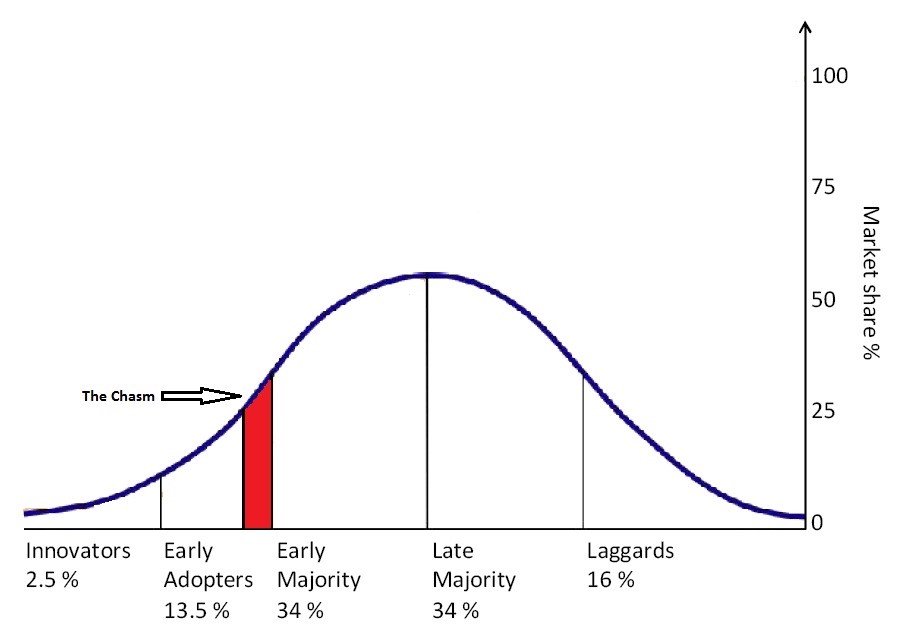 In his book Crossing the Chasm, Geoffrey Moore argues there is a chasm between the early adopters of the product (the technology enthusiasts and visionaries) and the early majority (the pragmatists). Moore believes visionaries and pragmatists have very different expectations, and he attempts to explore those differences and suggest techniques to successfully cross the “chasm,” including choosing a target market, understanding the whole product concept, positioning the product, building a marketing strategy, choosing the most appropriate distribution channel and pricing.

The most difficult step is making the transition between visionaries (early adopters) and pragmatists (early majority). This is the chasm that he refers to.

Moore’s theories are only applicable for disruptive or discontinuous innovations (those who force a significant change of behavior by the customer).  Isn’t it what coaching does?

Pragmatist (early majority) in pain are the people who will move first.  They are not in exploration mode, they are in desperation mode.  Who really has to act now?

This makes a lot of sense because most people change their lives only after a tragedy!

Why could we use these theories with coaching

After some reflection, I could see many parallels with the profession of Coaching.  I believe that we can use the theory of Diffusion of innovation and crossing the chasm to try to assess how far we are from mass market acceptance. Here are some reasons why I think we could use these theories to assess the state of Coaching.

Therefore, for all these reasons, I believe that Coaching is still an innovation/new idea despite more than 20 years of existence.  It has not yet reached the masses which means that the majority of people don’t know what coaching is and what are the benefits of it.

According to the 2014 ICF global Consumer Awareness Study, 17% of the global population is very aware about coaching, 41% is somewhat aware, and 42% is not aware (p8 of the report).

17% are very aware and have been in a coaching relationship.

Here are some observations in light of the information above

The 17% of the population that is aware and have been in a Coaching relationship is probably mostly composed of the Innovators and Early adopters and a few from the other categories.

If 17% of the population are very aware and have been in a coaching relationship, we should be very close to the tipping point and to mass market acceptance.

However, maybe the tipping point in the cases of human evolution thinking or awareness, is higher than in the theory of diffusion of innovation.

As we have seen before, our profession seems to be in the tipping point zone which would trigger mass market acceptance.

Actually Coaching is known only by a minority (17%) in the general population despite the followings facts:

We seem very close to Mass market acceptance, so what is missing?

Vision of the coaching community

Now let’s look at what the coaching community vision is for the future.

Coaching is certainly a profession which can contribute very significantly to a better world and when we will reach mass market acceptance we could see a major shift in humanity!  This is my greatest hope!

In fact, all Coaches are so convinced that they we have found a great way to improve human life, that they have changed careers, they have invested thousands of $$$ and time in their development and they have shifted their lives and are dedicated to change human lives.

I think that the coaching community through the ICF and the likes of CTI (Coaches Training Institute) is striving toward that goal of reaching mass market acceptance.

Here are a few examples of this:

ICF vision for the future

The International Coach Federation is committed to enhancing global awareness of professional coaching and of ICF.

CTI vision for the future

In their vision story, The Coaches Training Institute CTI, one of the biggest Coaching school in the world, is hoping to transform 50 million lives by 2023.

As we can see, these examples of big audacious goals could have a major impact on humanity.

In light of the vision and work being done through organizations or events we can assume that we will eventually reach mass market acceptance but since we are an innovative profession and we like to generate disruptive and positive changes in people’s lives and in the world, I am calling on you coaches for your ideas by asking you what else?

How can we reach the tipping point?

How can we cross the chasm?

I would be glad to hear your ideas and then I could put them all together and come back to you with a summary.

I hope to generate a discussion that will move us forward on our quest to change the world!